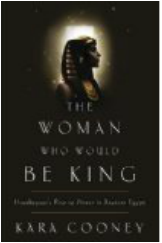 Hatshepsut—the daughter of a general who usurped Egypt's throne and a mother with ties to the previous dynasty—was born into a privileged position in the royal household, and she was expected to bear the sons who would legitimize the reign of her father’s family. Her failure to produce a male heir was ultimately the twist of fate that paved the way for her improbable rule as a cross-dressing king.  At just over twenty, Hatshepsut ascended to the rank of pharaoh in an elaborate coronation ceremony that set the tone for her spectacular reign as co-regent with Thutmose III, the infant king whose mother Hatshepsut out-maneuvered for a seat on the throne. Hatshepsut was a master strategist, cloaking her political power plays in the veil of piety and sexual reinvention. Just as women today face obstacles from a society that equates authority with masculinity, Hatshepsut shrewdly operated the levers of power to emerge as Egypt's second female pharaoh. 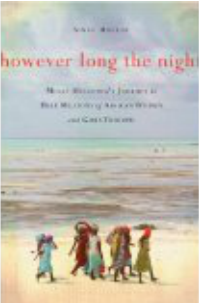 It has been a long time since I have been so moved by a book. Aimee Molloy's However Long the Night is a powerful biography focusing on the tireless efforts of Molly Melching who has worked for decades in Senegal to educate and improve the lives of the women and children of villages across the nation.
Melching originally traveled to Senegal as part of a graduate program study abroad, and was looking forward to learning about the culture and people. What she hadn't planned on was the cancellation of the program. After convincing the university to allow her to study, Melching couldn't help but fall in love with all that Senegal offered. Rather than returning home, however, Melching extends her stay and secures a position as an Peace Corps employee. She starts a school to teach the local children, focusing on them reading stories that reflect their own culture and language, rather than stories of European children who share little with their Senegalese peers. This venture quickly leads to another and before Melching knows it, she has embedded herself into the Senegal culture, learned the language, and established an NGO named Tostan to help educate the women and children of the nation. While she set out to improve the quality of life, it becomes apparent that one issue needs attention - that of FGC (female genital cutting). Remarkably, after much effort, and devoted educational efforts Melching and the women of the villages begin to notice a change in the FGC tradition. The women feel empowered, and slowly begin to convince others that a change is needed.
This powerful book is inspiring, engaging, and insightful. I read it in one sitting, fascinated that I had gone so long knowing so little about Melching and the FGC crisis in Senegal. 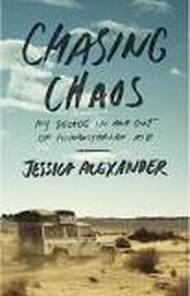 I've often wondered what draws people to save the world by traveling around the globe and offering aid to those in other countries.        While it sounds xenophobic, I've often thought that with all the needs in our own nation, why go somewhere else and why would you  think you can make a difference.

That's what led me to Chasing Chaos by Jessica Alexander. While I can't say that the book answers all of my questions, it does an    excellent job in providing information and a personal experience that I found informative, thought-provoking and important. Ms.  Alexander has spent considerable time in places in Africa, Haiti and other locales and has provided an excellent account and analysis of  foreign aid and the world of NGOs, the U.N. and disaster recovery efforts.

Her description and re-telling of her time in Rwanda, Sierra Leone and Haiti were excellent and I feel much better informed after reading  it. I recommend this book wholeheartedly. Ms. Alexander walks the lines between autobiographer, journalist and scholar in this book and  the end product is exceptional 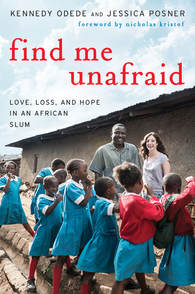 This book is a must-read. I have seldom (if ever) read a book that brought me to tears every few chapters. Kennedy's incredibly difficult life is a story in and of itself, but his ability to have hope in spite of all of the difficulties he faced is inspiring and uplifting. The flow of the book is marvelous as Kennedy and Jessica's stories are intertwined to come together into their wonderful dream. Facing a life of abject poverty in one of the largest slums in Kenya, Kennedy found faith in others that their lives could be changed. And when Jessica was added to the formula after a college semester abroad, they became the fantastic team that continues to move this wonderful organization forward. Block out some time to read this book, as it is very difficult to put down, as you wonder what else could happen to these two. Very well written. A delightful story in so many ways. Please read it!!