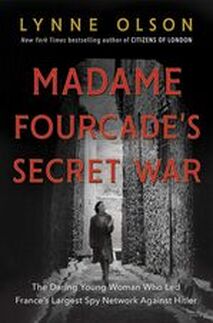 ​Madame Fourcades Secret War
Lynne Olson
In 1941 a thirty-one-year-old Frenchwoman, a young mother born to privilege and known for her beauty and glamour, became the leader of a vast intelligence organization—the only woman to serve as a chef de résistance during the war. Strong-willed, independent, and a lifelong rebel against her country’s conservative, patriarchal society, Marie-Madeleine Fourcade was temperamentally made for the job. No other French spy network lasted as long or supplied as much crucial intelligence—including providing American and British military commanders with a 55-foot-long map of the beaches and roads on which the Allies would land on D-Day—as Alliance.Lynne Olson tells the fascinating story of a woman who stood up for her nation, her fellow citizens, and herself.