This book was on many of the Best Books of 2011 lists and with good reason.  Catherine came to Russia as a minor German princess betrothed to Grand Duke Peter, the heir to the Russian throne.  Finding herself in a foreign land and speaking no Russian, she educated herself in all things Russian and worked to give herself a classical education corresponding with  Voltaire, Grimm and Diderot.  1n 1762 she became the Empress of Russia and ruled for 35 years.  Her story is one of survival and success in a world she never dreamed she would be part of as a young girl. 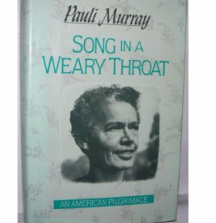 As February is Black History month, it seemed fitting to choose a book about an African-American woman.   Although there are many to choose from,  Pauli Murray is someone who has stayed with me ever since I read her autobiography in the 80's.  The Reverend Dr. Anna Pauline (Pauli) Murray (November 20, 1910 – July 1, 1985) was an American civil rights advocate, feminist, lawyer, writer, poet, teacher, and ordained Episcopalian priest. . Through her numerous work she demonstrated that knowledge had to be used in order to achieve justice and freedom in order to give back to society. The last stop of her rich and varied career was in 1977 when she became the first black woman in the US to be ordained an Episcopalian priest.  In performing her first Holy Eucharist at the Chapel of the Cross in Chapel Hill, where her grandmother, a slave, was baptized, Murray finally believed that "All of the strands of my life have come together."

March is Women's History Month and finding one book to showcase on a website of books about women was a challenge.  I chose When Everything Changed because I felt it captured the challenges and triumphs of women during the past 50 years in America.  Collins illustrates the stories of women whose names we know as well as those we would probably not know unless we read her book!

No particular theme came to mind as I picked a book for this month, so I picked one that I enjoyed from the past.  Many you may have read Geraldine Brooks' fiction.  Her own live story equals her fiction.

In Foreign Correspondence: A Pen Pal's Journey to Down Under and to All Over, we meet Geraldine as a young girl in a working-class neighborhood of Sydney, Australia. She longed to discover the places where history happens and
culture  comes from, so she enlisted pen pals who offered her window on adolescence in  the Middle East, Europe, and America. Twenty years later Brooks,embarked on a human treasure hunt to find her pen friends. Foreign Correspondence speaks to the unquiet heart of every girl who has ever yearned to become a woman of the world.

Mother's Day is in May and it seemed appropriate to chose a book about mothers.  There are many wonderful books about mothers but I chose this one because Victoria Rowell, the star of television and film, had many mothers. After being born in Maine to an unmarried white mother whose lineage was Yankee blueblood and an unidentified black father, Victoria began life as a hospital boarder infant. After sixteen days, she was placed with a Caucasian foster family—a highly discouraged practice under the state's child-welfare laws, which then prohibited the adoption of African-American or mixed-race children by white families. At this critical stage, Rowell encountered the first of what would be an astonishing array of remarkable women—each of whom presented herself for different purposes at every dramatic turn of Vicki's life, each sent to love, nurture, guide, teach, or challenge her on the road to becoming an astonishingly remarkable woman in her own right. She would go on to become a world-class ballerina and an actress whose credits include the Cosby Show and Diagnosis Murder, in addition to her long-time role on The Young and the Restless.

Recently the Vatican charged  American nuns with being radical feminists and putting too much emphasis on poverty and social justice issues.  In this  2007 book, Kenneth Briggs provides insight into the relationship between American nuns and church hierarchy long before the conflicts of today.  It makes for interesting reading in light of the most recent actions of the Vatican. 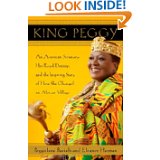 Monthly Book Feature--July 2012
Peggy was a Ghanian-American woman working as a secretary in the Ghanian embassy in Washington D.C. when she got a middle-of the-night call telling her she had been elected the king of her ancestral village in Ghana.  Talk about a middle of the night wake-up call!

Peggy struggled with whether to accept this kingship and when she finally does she experiences all of the challenges of leadership you might expect and then some.  She becomes king to a town of 7,000 souls on Ghana's central coast, half a world away. Upon arriving for her crowning ceremony in beautiful Otuam, she discovers the dire reality: there's no running water, no doctor, and no high school, and many of the village elders are stealing the town's funds. To make matters worse, her uncle (the late king) sits in a morgue awaiting a proper funeral in the royal palace, which is in ruins. The longer she waits to bury him, the more she risks incurring the wrath of her ancestors. Peggy's first two years as king of Otuam unfold in a way that is stranger than fiction. In the end, a deeply traditional African town has been uplifted by the ambitions of its headstrong, decidedly modern female king. And in changing Otuam, Peggy is herself transformed, from an ordinary secretary to the heart and hope of her community.
This book is a wonderfully warm, humorous, and informative true story.  Peggy’s observational and narrative skills bring the story to life in vivid terms.  It reads like a novel and captivates the reader with its story.

Monthly Book Feature--August 2012
If you are a baby boomer , indeed, if you were alive anytime after 1960 and were born blessed with hearing then you have heard a Carole King song. She had her first Number 1 hit at the age of 18, incidentally launching the `Girl Group' craze of the early `60s, with the Goffin & King classic, "Will You Love Me Tomorrow". In 1997, she had her last chart topper with "The Reason" which was written for Aerosmith, but performed by Celine Dion. In May 4, 2010 King and James Taylor released an album called Live at the Troubadour, which debuted at No.4 in the United States. In between she had 116 other pop hits, according to Billboard Magazine. Making her, far and away, the most successful female songwriters of the last half of the 20th Century.

Carole King chronicles her life and writes about her life as a musician, a mother, and environmental activist.  Her stories are entertaining and provide the reader with interesting  insights into the music business along with her life off the grid in Idaho.

What drew me to this book was the possibility that we may have a Mormon president in November.  I was curious to know more about the Mormon faith.  In this book. Jana Richman rides a motorcycle from Illinois to Utah following the path that all four of her grandmothers took as young Mormon wives in the 19th century.  The author undertakes this journey to delve into her own struggle with Mormonism and arrives at a deeper understanding, and a redefinition, of her own faith.  Readers will learn more about the early Mormon church and come away with a better understanding of the hardships that members endured to find a place in which they could worship freely.

Monthly Book Feature--October 2012
When I choose to read a book, often times it is because I am trying to make sense of something that is happening in the world.  Reading about the issues through the eyes of a woman allows to me to more easily understand the topic.  Such was the case with The Butterfly Mosque:  A Young American Woman’s Journey to Love and Islam. In this book G. Willow Wilson writes of enrolling in an Islamic studies course at Boston University which leads to her conversion to Islam and a move to Cairo, Egypt  She settles in Cairo where she teaches English and submerges herself in a culture based on her adopted religion. And then she meets Omar, a passionate young man with a mild resentment of the Western influences in his homeland. They fall in love, entering into a daring relationship that calls into question the very nature of family, belief, and tradition. Torn between the secular West and Muslim East, Willow records her intensely personal struggle to forge a “third culture” that might accommodate her own values without compromising the friends and family on both sides of the divide. As a writer, Wilson helped to satisfy my need to better understand the people of Egypt and their struggles to make sense of their new political environment.  As I watch the people in the streets of Cairo on the news, I feel that I know a little bit more about their lives as a result of reading this book.

Monthly Book Feature--November 2012
Perhaps you are tired of all of the politics that seem to have consumed our lives and after the election is over the last thing you want to do is read a political memoir.  However, if you give this book a chance you will be treated to an outsider's view of the inside of a political campaign as well as to Connie Schultz's inner most thoughts when it came to dealing with her own identity issues. As the book (and campaign) progresses, the reader can see how the humor and energy changes. This is a great read that will take you, from the wife's perspective, through the underbelly of how campaign strategy works and how the opponent's tricks play upon the candidate. It will take you, as well, through the inner mind workings of an intelligent woman who had to change her life and put her career on hold to support someone she loves.

This is not your normal political read. You do not need to be a "political junkie" to enjoy it. Anyone who has ever evaluated her own life, or had to deal with society's stereotypes of how wives and women are to "be"; or just want a good read with humor and insight on life thrown in, will enjoy this book.

Monthly Book Feature--December, 2012
When I went to pick a book for this month, I tried to find one that might make a good Christmas present.  I thought The Bread of Angels might fit the bill. Stephanie Saldana was a lonely and depressed young woman, a true tortured soul with a broken heart when she first traveled to Damascus, Syria in the summer of 2004. A fearless world traveler with a determination to learn the Arabic language, she found herself in Damascus in order to study Islam, specifically the Muslim prophet Jesus of the Koran, on a Fullbright fellowship which was intended to foster a greater American understanding of Islam in the post 9/11 world. As a student of divinity she was eager to learn how Christians practiced their faith in an Islamic country.
Her story reads like a captivating travelogue, rich with culture, the lively flavors of Damascus, the austere beauty of the desert, the soul-shaking intensity of an ancient monastery where she retreats for spiritual exercises. She embraces with great reverence and tenderness the common themes of the Christian and Islamic faiths ~ opening up, letting go, finding peace, getting closer to God. Her mystical metaphors are beautiful and thought provoking and appropriate for this time of the year.