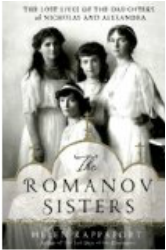 This is an incredible book, beautifully written and researched. It is also heartbreaking. I can’t tell you how many times I read something about one of the four Romanov sisters, the doomed daughters of Czar Nicholas and Alexandra, that caused me to stop reading and just stare at the faces on the cover. The author brings these young women to life, and it is impossible not to grieve for the innocent, young lives lost too soon.

Although the title refers to the four sisters (who referred to themselves as OTMA – Olga, Tatiana, Maria and Anastasia), the book actually begins before the marriage of their parents. Nicholas and Alexandra came to love each other very much; they were absolutely perfect for each other. They were absolutely wrong for the Russian monarchy. Nicholas would have made a wonderful country gentleman. Alexandra was very shy and suffered from health problems that limited her mobility. They were, however, warm and loving persons. How happy they could have been in other circumstances.

Reviewed by JLee
Empress of the East
Leslie Peirce
​2017