I  was fascinated by Barbara Brown Taylor's searchingly honest story of her struggle between wanting to serve God as an Episcopal priest and wanting to love God as one of God's beloved children. Doesn't sound as if the two desires conflict, does it? But in fact they do, and this is her story of that profoundly wrenching conflict and how she has tried to resolve it.

Taylor, who as a child fell in love with God as first revealed in the beauty of nature, became a famous preacher and famous writer in the Episcopal Church. She describes how much she loved the people both in and out of church that she served. She also describes how much she loved God, and how the busy-ness of her ministry came between her heart and God. Finally she got to a breaking point, and she chose: she ceased her "professional" ministry and became a college professor of religion. And after a dark night of the soul she found herself where she believes she needs to be -- back in "right relationship" with the Divine. But this all came at a high price. She is quite unsparing in her description of what she's lost as well as what she's gained.

She's also eloquent about the pressures on the Episcopal Church, and sounds a prophetic warning about its future if it continues in the hierarchical way it currently follows.
Reviewed by a reader in Washington DC
Leaving Church:  A Memoir of Faith
Barbara Brown Taylor
2009 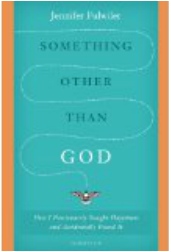 When Jennifer stood in a Catholic Church on Easter 2007, preparing to become Catholic, there was hardly a more unlikely convert. Born and raised in a skeptical home, which valued Carl Sagan more than Jesus, Jennifer developed an ardent atheism. She rejected God, mocked religion, promoted abortion, and chased happiness above all through pleasure, work, money, and partying. But then she met Joe. Joe was brilliant. He had multiple degrees from Ivy League institutions and was rapidly climbing the corporate ladder. Yet, strangely, he identified as a Christian. "How could such a smart man believe something so ridiculous?" Jennifer wondered.
That led her to rigorously examine the claims of Christianity, if only to prove them wrong. She gorged on books. She frequented online comment boxes and discussion boards. She even started a blog which invited Christians to counter her atheism. This painstaking research, combined with difficult questions about meaning, death, and existence, slowly led Jennifer to believe that God existed, and even more that Jesus was God in the flesh. Though obviously troubling, she could have accepted this "mere Christianity" and moved on. But after exploring many Protestant churches, she distressingly realized that the evidence was pushing her toward a far more unsettling destination: the Catholic Church.
Smart, inspiring, and absorbing, Jennifer's book will go down as one of the best spiritual memoirs since "Mere Christianity." It will lift her to her rightful place alongside Augustine and Lewis, troubled converts, talented memoirists, and courageous intellects who each followed the truth to its beautiful and unsettling conclusion. Reviewed by B Vogt
Something Other than God
Jennifer Fulviller
2014 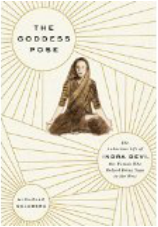 It’s hard to imagine anyone more perfectly positioned in history than the chameleon-like Indra Devi, rightly credited in Michelle Goldberg’s exhilarating new biography, THE GODDESS POSE, with pioneering yoga as a physically, socially and spiritually acceptable discipline in the Western world.

Born at the close of the 19th century (1899), living at her famous frantic pace throughout the entire 20th century, and dying almost serenely at the dawn of the 21st (2002), Devi witnessed virtually every major conflict, cultural phenomenon and political upheaval of what arguably has been the most turbulent era in global history. And she did so on no fewer than four continents.

Born in Latvia into the Russian minor nobility and periodically reinventing herself through half-a-dozen name and career changes, as well as numerous geographical moves (she was technically a stateless person for much of her life), the complex woman who ultimately identified as Indra Devi didn’t achieve sustained success as a proponent and teacher of yoga until she was almost a senior citizen. At a

time of life when many career professionals --- especially those in the physical arts --- are gearing down into well-earned retirement, Devi was relentlessly immersed in the American celebrity lecture circuit and teaching brand-name stars like Greta Garbo and Marilyn Monroe in her Hollywood studio.

Finding your personal and public groove in late middle age is perhaps not as unusual for “zoomers,” the actively elder baby-boomer (post-1945) generation that exerts so much financial and political clout these days. But as Goldberg, an award-winning investigative journalist and initially underwhelmed yoga student, recognizes throughout THE GODDESS POSE, Devi was consistently atypical of her own era. She attracted attention in exotic and unusual (sometimes even potentially dangerous) contexts by living as an extreme definition of the pre-feminist “free spirit.”

To her credit as a diligent and meticulous author (don’t overlook the impressive volume of source notes closing her book), Goldberg does not take any easy roads through yoga history and fashion; nor does she pose, goddess-like or not, as an expert on the relative merits of yoga’s several dozen classic postures, or asanas. Instead, within the context of Devi’s own exploratory life and times, she offers readers an even-handed sampling of representative leading lights, trends and opinions through which Devi was influenced, and from which she eventually developed her own philosophy and esthetic. In other words, if you want to learn in detail about the many gurus, sources, branches, styles and practices of yoga, you want another book, not this one.