If you are one of the many who has been waiting for the new season of Downtown Abbey, you might want to read a real life account of a young women in England from the same time period.  Testament of Youth by Vera Britain is the story of Vera's life from 1900-1925. First published in 1933,Testament of Youth has been acclaimed as a classic for its description of the impact of World War I on the lives of women and the middle-class civilian population of Great Britain. The book shows how the impact extended into the postwar years. It is also considered a classic in feminist literature for its depiction of a woman's pioneer struggle to forge an independent career in a society only grudgingly tolerant of educated women. The book was also made into a 5-part Masterpiece Theater and shown in the US in 1980.

In my mind, Supreme Court Justices were on a pedestal just beneath the 12 apostles.  Sonia Sotomayor's memoir allows the reader to understand that hard work and persistence are what allow those of us not hand selected by God to achieve the top of our profession.  Written in a very engaging style, Ms. Sotomayor brings us into her world of the Puerto Rican community of her youth in the Bronx, through her years at Princeton and Yale and her life until she is appointed a NYS federal judge.  She has much to teach us about how humble beginnings should not limit our reach for the stars.

It has been 50 years since the publication of Rachel Carson's Silent Spring, the book that exposed the dangers of DDT to the general public and really set into motion the beginning of the modern environmental movement.
We all owe much to Rachel Carson's dedication and commitment to her passion--the natural world.  However, reading about her life in the mid-20th century provides the reader with insights into Rachel Carson that can't be found in the significant books she wrote.

You may know Isabel Allende through her magical realism fiction.  In this book of non-fiction, she writes about her daughter Paula who collapsed into an irreversibly coma due to a rare  disease. This book arose out of a mother's need to understand the past, the  future, and the mysterious connection between the two. Allende tells of events before her birth, of Chilean politics and how it affected her famously political  family, of falling in love, of becoming a writer, of motherhood, of her journey  through Paula's illness - while embracing the spirituality that pervades her fiction. If you enjoyed Allende's fiction, you will enjoy this book also.  If you haven't read her fiction, reading this book may encourage you to do so

As May is the month for honoring mothers, it made sense to select a book written about a mother.  McBride's mother was a Polish Orthodox Jew who migrated to America at the age of two with her family during the early 1920s. She left home and moved to New York when she was nineteen where she met and married the author's father, a black man. The author tells of his childhood, of his family, and of the issue of race that ultimately colored his life while growing up in predominantly black neighborhoods, where his mother stood out like a sore thumb because of the color of her skin. It was always an issue his mother avoided discussing with him, as for her it was not an issue. It was not until the author wrote this book that his mother discussed the issue of race within the context of her own life. From this dialogue emerges a fascinating look at the issues of race, as well as religion, and how it impacts on an individual's identity within our race conscious society.

This month in the news, there has been much attention given to Smithfield Ham being purchased by a Chinese company and the Chinese desire to learn more about American food technology.  This book, Serve the People, gives insights into Chinese food.  Jen Lin-Liu is a Chinese-American who goes to China on a Fulbright scholarship  as part of her journalism career and ends up riding her bike down a narrow  street to take cooking classes. The story (both humorous and touching) is told  through her quest to learn about authentic Chinese cuisine both past and  present, home cooking and high end restaurants.

When NASA selected the first men to be astronauts in 1959, one of the requirements was that they had stable marriages and wives who would support them.  This book tells the story of those wives--how they were followed by Life magazine journalists who documented their fears and every day lives; how they had lunch with Jackie Kennedy and dinner with heads of state.  This book provides insight into how these women managed the stresses of space flight from the home front and how they grew from timid 1950s housewives into celebrities in their own right.  Each dealt with these challenges in their own way and the reader has the pleasure of meeting many of them firsthand. 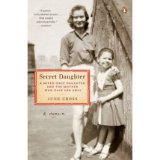 No childhood is simple, but June Cross's was perilous, teetering on the brink of a racial divide.  She was born in 1954 to Norma Booth, a glamorous aspiring white actress and James Cross, a well-known black comedian. They soon parted, and mother and daughter lived together in NYC until June was 4.  When it became clear that the dark-skinned child could no longer pass as white, Norma sent June to live with a black family in Atlantic City.  But Norma could never quite let her daughter go and her daughter's struggle with this ambivalence forms the core of this poignant memoir.  June's story includes a variety of family and non-family members whose existence in her life provide the reader with a rich reading experience.  Cross is a journalist and award-winning television producer whose writing skills are evident through out the book.

In 1948, as civil war ravaged Greece, children were abducted and sent to communist "camps" inside the Iron Curtain. Eleni Gatzoyiannis, forty-one, defied the traditions of her small village and the terror of the communist insurgents to arrange for the escape of her three daughters and her son, Nicola. For that act, she was imprisoned, tortured, and executed in cold blood.  This book, written by her son, a NYT's investigative reporter, tells her story.  Gage returned to Greece to learn about his mother's extraordinary bravery which led her to sacrifice her life so that her children could live.  This is an extremely powerful book whose story has stayed with me since I read it in the 1980s. 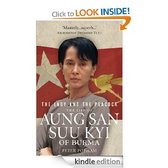 Suu Kyi’s remarkable life begins with that of her father, Aung San. The architect of Burma’s independence, he was assassinated when she was only two. Suu Kyi grew up in India, studied at Oxford, and worked for three years at the UN in New York. In 1972, she married Michael Aris, a British scholar. They had two sons, but she never forgot that she was the daughter of Burma’s national hero. In April 1988, Suu Kyi returned to Burma to nurse her sick mother. Within six months, she was leading the largest popular revolt in the country’s history. She was put under house arrest by the regime, but her party won a landslide victory in the 1990 elections, which the regime refused to recognize. In 1991, still under arrest, she received the Nobel Peace Prize. Altogether, she has spent over fifteen years in detention and narrowly escaped assassination twice.  Popham's book illuminates the sacrifices Suu Kyi made and how she serves as an inspiration for all of us 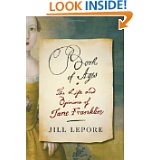 Monthly Book Feature--November 2013
Book of Ages:  The Life and Opinions of Jane Franklin
by Jill Lepore

Almost every American knows about Benjamin Franklin and his many accomplishments; however, very few of us know anything about his younger sister, Jane.  Thanks to Jill Lepore, we have the opportunity to meet her.   Jane's life was incredibly hard-- close to poverty, 12 children in rapid succession ,a non- functioning husband. Jane turned to religion, which always offered her some comfort. But, as she grew older, we do see her developing more into her own woman with her own opinions --never feeling sorry for herself, optimistic and always loving Ben.  We also gain insights into the life of women in the New England in the 1700's and how they were the backbone of their society. 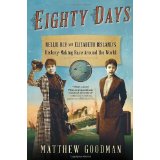 Monthly Book Feature--December 2013
Eighty Days: Nellie Bly and Elizabeth Bisland's History-Making Race Around the World
by Matthew Goodman
You have probably either read the book or seen the movie, Around the World in 80 Days, by Jules Verne.  This book traces the attempt by two women in 1889 to try and beat the fictional record set by Verne's Phileas Fogg. Bly sets out heading east and Bisland goes west. Goodman traces both of their journeys sharing intriguing stories of their travels and what happened to them both after their epic race. This book is an enjoyable read, rich with the history of the time.